A service line is an underground pipe that carries water from your meter to your home.

Find your water meter. Most residential water meters are located near the curb or sidewalk at the front of the property in a concrete "box." The box will have a metal or plastic lid and may be marked, "Water Meter." Carefully lift the cover and check for leaks. 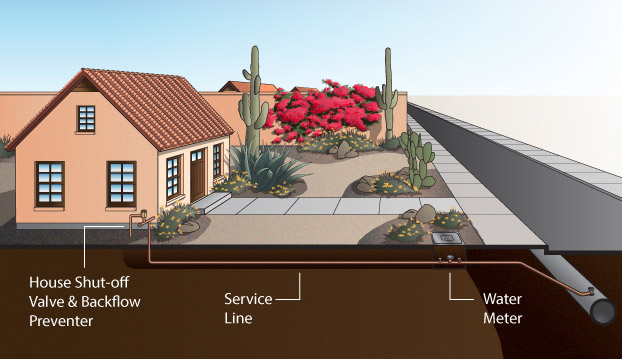 Find the house (main) shut-off valve on the water supply riser, generally located in the front or on the side of the house below the hose bibb. (See examples 1a and 2a for two typical set-ups.) Check for leaking water around exposed pipes and valves.

Visually inspect your property between your house shut-off valve and your water meter. A wet spot, small hole or depression may indicate an underground leak in the service line. Refer to Service Line Check (Section 4) if you suspect a leak in your service line.

Check all other hose bibbs and/or outdoor faucets for dripping water and/or wet spots. 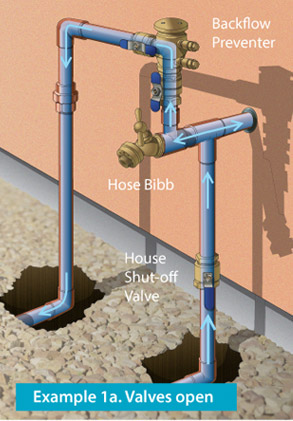 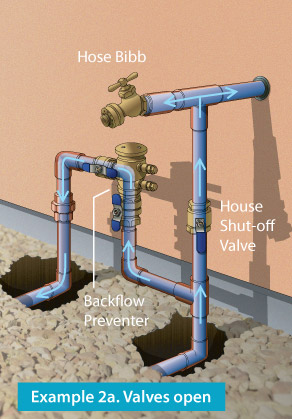 Next
Some water providers lock their meter boxes. Contact your water provider for more information. In the meantime, continue with Visual Leak Inspections (Sections 2 and 3) if you cannot access your water meter.

The most common leaks found around the home occur in the irrigation system. A typical irrigation system consists of a backflow prevention device, valves, underground pipes, emitters and/or sprinkler heads and an irrigation controller.

First, walk around your property to look for leaks. Check the backflow prevention device, the irrigation valves and look for wet spots, small holes and depressions, as these may indicate an underground leak.

Next, run the irrigation system and walk around your property again to look for leaks that only occur when the system runs. Use the checklists below.

A puddle of water on the ground or continuous dripping may indicate a leak or possible failure of the backflow prevention device. 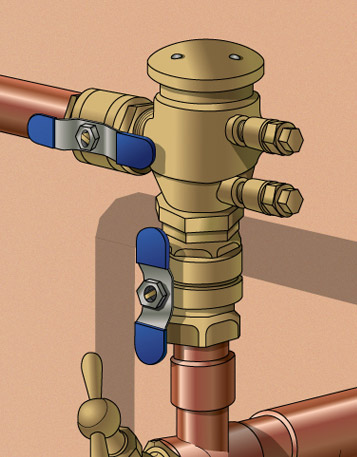 Continue
Contact your water provider for information about how to locate a certified backflow contractor in your area to test and repair your backflow prevention device.

Check sprinkler heads when they are not running. Continuous seeping often indicates a malfunctioning valve. Valves can fail over time or debris (rocks, dirt, etc.) can prevent the valve from closing properly. 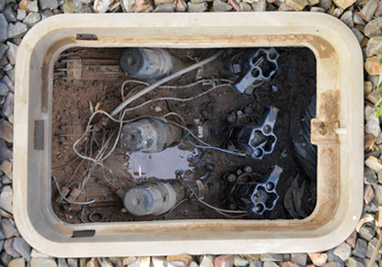 Look for missing or broken drip irrigation emitters or cracked tubing. (Water should trickle rather than squirt from emitters.)

Check wiper seals between the neck and base of the sprinkler heads. (Water will seep out of a worn seal.)

Check for missing or broken bubblers or cracked riser pipes.

Inspect your yard for wet spots, small holes or depressions, as these may indicate an underground water leak. 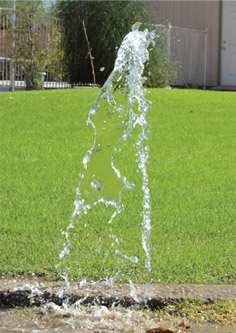 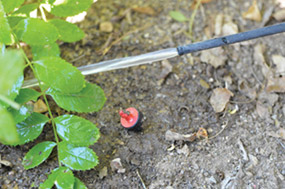 According to EPA WaterSense, an irrigation system that has a leak 1/32nd of an inch in diameter (about the thickness of a dime) can waste about 6,300 gallons per month.

Pool water evaporation is normal; however, an abnormal drop in water level may indicate a leak. An autofill (automatic pool water leveler) can mask a leak as it will automatically replace water lost and thereby prevent a visible drop in pool level.

Check the pool and/or spa autofill for proper operation:

Check the autofill to see if it can stop the water flow. If your autofill is allowing water to flow through it, gently lift its float to see if the flow stops.

Check the float. If set too high, it will cause a higher than desired pool water level.

Note pool level, and then turn on pool equipment. A drop in water level may indicate a leak.

Visually inspect equipment, especially around pipe joints. Walk from the pool equipment to the pool, to the water supply line (if you have an autofill) and around the pool. Look for any wet spots, small holes or depressions in the soil, as these might indicate an underground water leak. 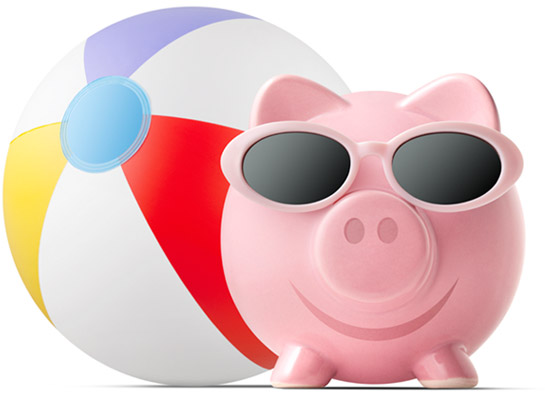 If you have not located your leak and you have checked around your home, consider a Bucket Test if you suspect a leak in your pool system.

A. If the pool water level (outside mark) dropped more than the bucket's water level (inside mark), you may have a leak and may want to contact a pool contractor.

B. If the level changes are the same, only evaporation has occurred. 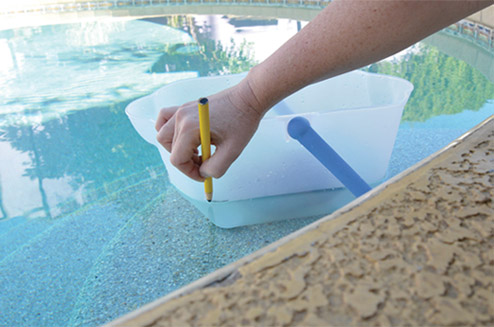 Be sure to check pool level more frequently during summer months!

Check for leaks or cracks on water supply lines and pipes.

Check for clogged gates or trenches.

Make sure ditches are clear of weeds and obstructions.

Clean any gates in your system before and during your water delivery. 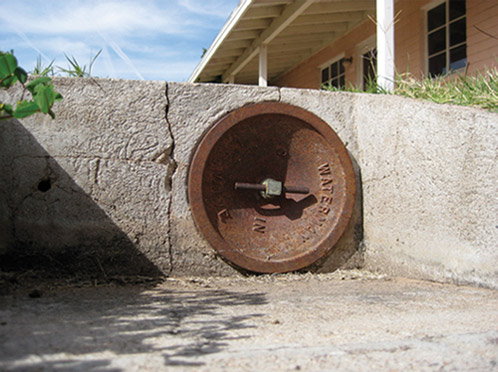